Hans is the main protagonist in The House of Bell and Candy (2014).

Note: This game is not translated in English. This is only I could understand the plot even tho it's in Japanese.

After he visits the doctor, his sister's missing. So he wanders in the forest to go look for her til he encounters a house made out of candy. As he enters the house, he climbs up the ladder and reads a book then suddenly the doors shut thigh and sees his sister's spirit. As he was teleport outside, he was chased by bloody animals and ended up looking at the pond of blood. After that he encounters a girl stabbing the ground with blood and drops a book. He explores the disarranged rooms, as he look at the fireplaces, a giant girl with bloody eyes named Amy chases Hans and escapes from her. Then he sees his sisters spirit again, teleport him to the dining room and escaped from the creepy girl. He teleport to the flower field with peaceful atmosphere, walked through the pathway of graves and founds a book by the big grave. Then teleport him to a dark maze lured by red glowing stuff and after he touches the torch, he teleport in the cell with a little girl. As he talked to the girl introduce her as Berliner (known as Bell), he looks at the axes and a black rabbit doll with no limbs that can talk (known as Haschen, Heath for short). As they go, a witch named Maria-Magdalene killed the creepy girl and wanders through her kitchen. He let Bell go first to sneak by the ladder and made it out by the fireplace. Then he sees his sister's spirit again and teleport them in the dark void with a little fire, then gather stuff and sees his flashback when he was young. As they found a door, they teleport to a fine room with pretty dresses. As he investigate, he was transfer to a blood trail casted by a witch with many animals. Then he now has to choose a way...

As he sees Bell, he hugs her to bring them back where they are. It's same like last time but Bell's alive and faces the witch. Bell was teleport out of the house and Hans hugs Maria-Magdalene as the fire engulfs them in the house.

After the credits, it seems he survives the fire. Then Bell said to him "idiot".

This is the true ending.

After that, he returned and walked the a long staircase which leads a big bloody bird cage and Bell and Heath disappears. Then he read the book and the witch teleport him to an area of many bird cages and many clones of his sister holding a bloody knifes. When he found something, he kills the clones of his sister, talks to the witch and teleport him to a dining table as he looked at the tray, he founds Bell's head. As for that, he kills Maria-Magdalene and cries over Bell's head and kisses her neck.

It's like ED 2 but he kills himself with a knife.

At some point, he escapes the house without Bell. Then ended up lying by a tree...

Hans' icon in the pause screen

Hans hugs Maria-Magdalene while being engulf in flames

Hans about to commit suicide with a knife

Hans lying on the tree 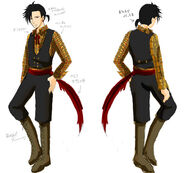