She arrives at Yuka's house til she heard someone scream and sees Yuka dead. As she roam around the house, she encounter the killer bear, and used nearby object to distract it. As she reaches the west room, she used the computer to "how to end hitori kakurenbo" but the electricity went out when the killer bear appears. When she sees a dead body, she leaves the bathroom. After she used the electrical cable on the computer, she research on how to end hitori kakurenbo which means she had to capture the doll and burn it. She founds a adhesive tape to trap the bear. She got some old books and oil to put in the fireplace and lights it up with a match. As she catches the cursed bear with tape and salt water, she burns the doll in the fireplace and passes out.

She woke up at the Kikugawa Police Station and meets Himuro Hitoshi. She realized Yuka was heavily injured meaning she's alive and she was performing the hitori kakurenbo. Hitoshi told her to return as a normal student tomorrow. As she was going outside, she was lost on the road. She talks to a man named Junji in his field to leave now but she was about to go, the road somehow a loop. She question the man that she can't go and took the man to the road, til a mysterious figure appears making the man crazy and chases her til she turned on the TV static (or make a sound or hide) to make it vanish for a while. She called Hitoshi the phone til the white figure appears. She founds a old man and said to her that she is cursed. She used the pliers to cut the wires to the factory. As for now, she went to the store and talks to a middle-aged woman named Satomi and encounters her in the factory. She asked the old man there was nothing on the factory. Then she sees the woman again in the playground til that woman insults her as she walks out and Mikoto is not sure what was she talking about. She calls Hitoshi again and got a call from Shouta as he talks about the kunekune and got a call from Hitoshi that he will be there and told her not to die. The TV turns on and shows today's victims which includes her in the list. As she gets advise from the old man, she went to the grave site and talks to the woman til the woman is mad and chases her til the kunekune kills the woman and flees. She talks to the old man about the incident of that woman and Hitoshi appears and thanks him and goes back to the police station.

At night, she was dreaming of what did she expect, people getting sliced by two clowns riding on balls holding drills. So she woke up to see Hitoshi, then she has this bad dream again but this time, it's her turn as minced meat. Then she woke up again to see Hitoshi but this time she sleeps on the couch. As she sleeps, she's next but she gets away in a train from the two killers. She pulled the lever, she teleport back to the police station but she's at the medical office, all she remembers is she slept at Himeno-san's room. She realized the killers are in the police station. If she throws an object at the killer, she evades the killer and continues till it gives up. As she explores the police station within the dream, she sees Hitoshi but the killer is with him and a fake. Then afterwards, she enters a room which the killer are gonna kill her then they merge to chase her. As she escapes, she was back at the train, she can feel pain in this dream, if she dies, in the other world she died by heart attack. She encounters the killer and runs away till she pushed the killer out of the train. While sleeping, she's in a paranormal event that involves in her sleep. The train has stop, she goes to the emergency exit and goes to the door to Hell, then she encounters the killer but with a butcher knife and hides from the killer. As she teleport, she faces the killer by finding the switches to kill the killer and founds herself in the train again. Then she woke up and escapes the paranormal event.

Two days later, there are no paranormal events happening to Mikoto yet. (Soon to be added) 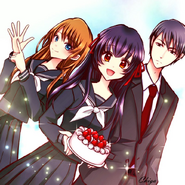 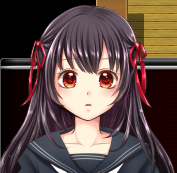 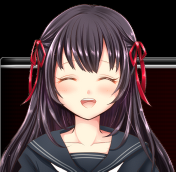