?
Tsubaki is the main antagonist of Rumor of the Kitchen's Knife (2007) and the main protagonist of Kitchen Knife's Herupumii (2013).

She has long red hair, red eyes with white pupils (in the game, she has no pupils) and a white dress. 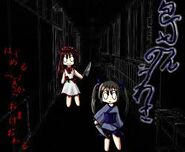